You know that we here at Knight’s Atari can appreciate a good toilet. But did you know that one third of the world population still doesn’t have access to a clean and safe toilet and one thousand children die every year due to poor sanitation?

You can find out about World Toilet Day here and here. 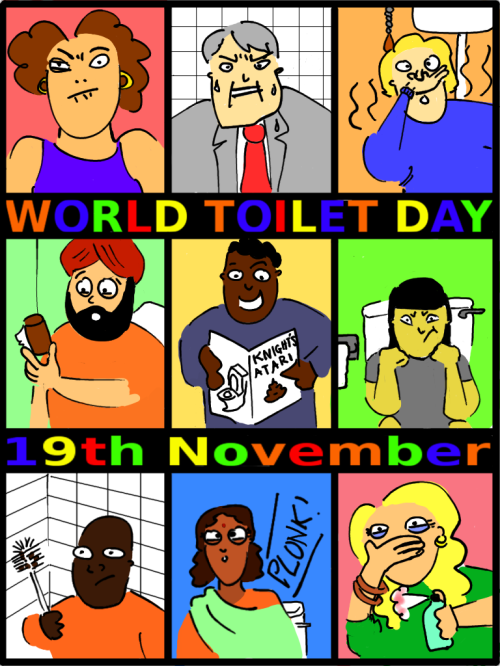 Editors’ Note: In this article, for the first time ever, Knight’s Atari have taken heed of our readers’ repeated complaints about our “f*cking asterisks”, and provided convenient links between the text and footnotes. Your feedback matters to us.

As the honeymoon period of living with new housemates gradually wears off, many of you will start to find that the blocked toilet becomes harder and harder to ignore. Since all the cool social justice warriors are poorly driving the feminism bandwagon these days, I’ll start this article with a nod to gender equality*, and even a footnote for the gays, before subtly segueing into some permutation of whatever other doubtlessly salient points I have to make on the subject of unblocking a toilet.
76% of blocked toilets on campus are caused by males. Males are bigger, therefore they eat more and make bigger poops. On top of that, literally, they add more toilet paper because they invariably have more hirsute arses which are more difficult to wipe clean and deshitnuggetify.** I’m sorry, gender quota advocates, but that’s just the way it is. 83% of people of who poo on the bathroom floor instead of in the toilet are female or Asian, if that helps. Another oft unaddressed issue is that a man’s eye can distinguish between fewer colours than a woman’s can, especially in dimly lit public bathrooms, so while a woman in her cubicle, squinting at the toilet paper, can see as the afterwipe colour changes through Intense Chestnut, Hazelnut Truffle,  Leather Satchel, Muted Mocha, Perfectly Taupe, Gentle Fawn, Elderflower Tea, and white,*** a man must (obviously) err on the side of caution as he sees brown, brown, light brown, orange, yellow, yellow, looks white, looks white, probably is white, is almost definitely white but best give another wipe just to be sure… resulting in squandered toilet paper. I was amazed at how much toilet paper I saved when I would have my girlfriend or mother assess the colour of my pieces of toilet paper post-wipe, and probably used an average of six sheets of paper less than I otherwise would have.
Furthermore, we all know girls only defecate fairies and rainbows, which, given their ethereal nature, are not likely to cause obstruction. Instead, females’ toilet blockages are caused by flushed tampons, dead cats, pubic hair, and the swaddlings of toilet paper she buries her suffocated fairies and shame in.

Regardless of whatever form your genitalia may take, sometimes you just come home to find a bison**** has made use of your facilities, as captured in this sketch by Dr. Kevin.

END_OF_DOCUMENT_TOKEN_TO_BE_REPLACED

We’ve been quiet here for a while but THAT IS ALL ABOUT TO CHANGE… slightly… maybe. Here are some quick doodles to keep you going.