This assertion has consumed philosophers for generations as they have tried and failed to resolve this conflicting statement, the equivalent of Fermat’s Last Theorem for those who contemplate the meaning of life and reality as we encounter it day in day out. Finally, a breakthrough has occurred. After years of painstaking study and brutal physical exercise designed to strengthen the mind as well as the body for the mind bending paradigm shifts and tortuous logical arguments upon which the solution rests, monks in an isolated monastery atop a mysterious misty mountain peak at the end of a double rainbow have cracked the enigma. The simplicity of the monks’ conclusion is dazzling, on par with the diamond sharp clarity and insight of Descarte’s “I think, therefore I am” and Arnold Schwarzenegger’s “It’s simple, if it jiggles, it’s fat”. 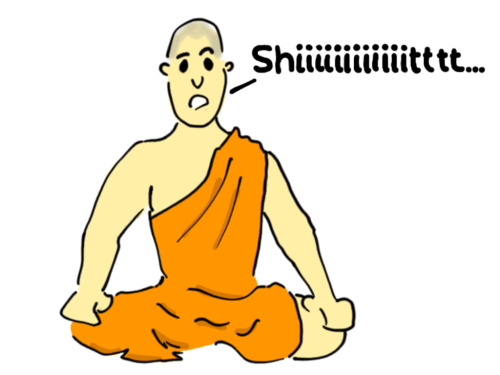 The solution is based on a few simple premises, which when strung together form a solid base for the development of more complex interlocking arguments, which when combined, boil down to a clear and radical conclusion which changes the human condition and alters how we interpret the reality of our existence. The full argument is published in book form, which in line with the monks’ admiration for Napster, is now freely downloadable online, provided you don’t use Windows Explorer. It is titled ‘Like Pearls passed by Swine’ and is in PDF format.

The kernel of the monks’ argument is that you can be both knowledgeable and ignorant concurrently. This is somewhat similar to Schrodinger’s Cat who is considered to be both alive and dead at the same time until full knowledge of the cat’s state is ascertained by opening the box in which it sits. The monks’ ingenuity lies in their application of this idea to the human experience: when presented with any given situation, you can acquire knowledge about the situation, allowing you to act accordingly but in doing so the burden of responsibility falls upon your shoulders. However, by denying the situation and sticking your head in the sand in order to remain ignorant, you will be free of this burden to act, until the consequences of not acting kick down your door and demand the rent it’s due.

The monks have solved this conundrum by the semantic and philosophical equivalent of a shimmy, step-over, and then a nutmeg, leaving behind the defender. Their conclusion is this; by acknowledging your ignorance of the situation and actively choosing to remain ignorant, this knowledge confers the power upon you to become more knowledgeable of the situation and gain the power to act accordingly if you so choose. This insight confers upon the individual the semantic state of being ignorant and powerless or knowledgeable and powerful simultaneously, similar to quantum superposition, or what the monks have termed ‘Denialisierung PunktKraft’ or the ‘point of force at conscious denial’.

There has been some pushback against the book. Tom Cruise has called for this book to be banned on grounds of blasphemy and inspiring religious hatred, while Oprah, staunch advocate of the self-help book ‘The Secret’ has heaped scorn on the whole notion, saying it amounts to little more than procrastination. Serious scholars and philosophers have however wholeheartedly embraced the concept, saying that a quantum shift such as this in human thinking will cause massive ripples and it will take some time before we can digest the enormity of the idea, but when we do it will benefit us all.